Please join the Indiana University School of Medicine community as we learn about the “On the Walls” Project, and unveil the portrait of Clarence Lucas, Sr. MD, the first African American graduate of the Indiana University School of Medicine. In addition to the portrait unveiling, attendees will learn about the life of Clarence Lucas, Sr. MD and hear from the artist who created his portrait, as well as Dr. Lucas’s granddaughter, Lynn Lucas-Fehm, MD, JD.

This event is presented by the American Medical Women Association Student Interest Group, the Women Advisory Council, and the office of Diversity Affairs.

About Clarence A. Lucas, Sr. MD 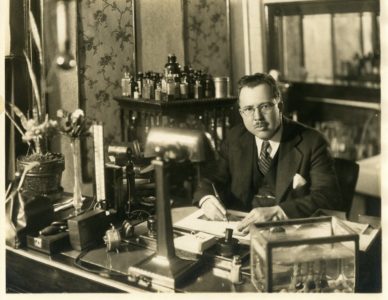 Clarence Augustus Lucas was born on November 23, 1884 in Huntington, West Virginia and was raised by his grandparents on their farm in Piketon, Ohio, a village east of Cincinnati. In 1903, he left Piketon to seek employment (including work in hotels and on Pullman cars and riverboats) that would allow him to attend medical school. In 1908, Lucas became the first African American to graduate from Indiana University School of Medicine and went on to complete his post-graduate internship at the City Hospital of Indianapolis. He also completed extensive post-graduate training at the New York Post-Graduate Medical School and Hospital (1916), abroad in London, England (1920, and at Harvard Medical School (1926).

Dr. Lucas served as a physician in the Indianapolis area for 59 years. He was a charter member and former president of the Aesculapian Medical Society, and served on the society’s committee in charge of promoting African American Health during “National Negro Health Week,” established by Booker T. Washington in 1915 in response to findings by the Tuskegee Institute identifying poor health conditions for African Americans. As president of the Aesculapian Medical Society in 1940, Dr. Lucas along with sixteen other African American physicians, successfully lobbied the mayor of Indianapolis (Reginald H. Sullivan) and hospital superintendent (Dr. Charles Myers) to establish training facilities for African American doctors and nurses at the Indianapolis City Hospital. In 1961, Dr. Lucas famously visited the medical missionary and Nobel Peace Prize winner, Dr. Albert Schweitzer, at his hospital in Lambaréné, Gabon. Dr. Lucas died in 1967, survived by his wife, Carrie H. Lucas, daughter Dr. Carolyn L. Dickson, son Dr. Clarence A. Lucas, Jr., and four grandchildren.

Dr. Lucas’s important contributions to medicine in Indianapolis and beyond were acknowledged by Dr. George H. Rawls (Indiana University Clinical Professor Emeritus of Surgery and founding director of the Master of Science in Medical Science program at IU School of Medicine) in his book, History of the Black Physician in Indianapolis, 1870-2000 (Indianapolis, 1984).

Welcome to the RLML News Blog

Find out what is happening at the Ruth Lilly Medical Library. This is your resource for library announcements including updates on library hours, new resources, events, and all things RLML.