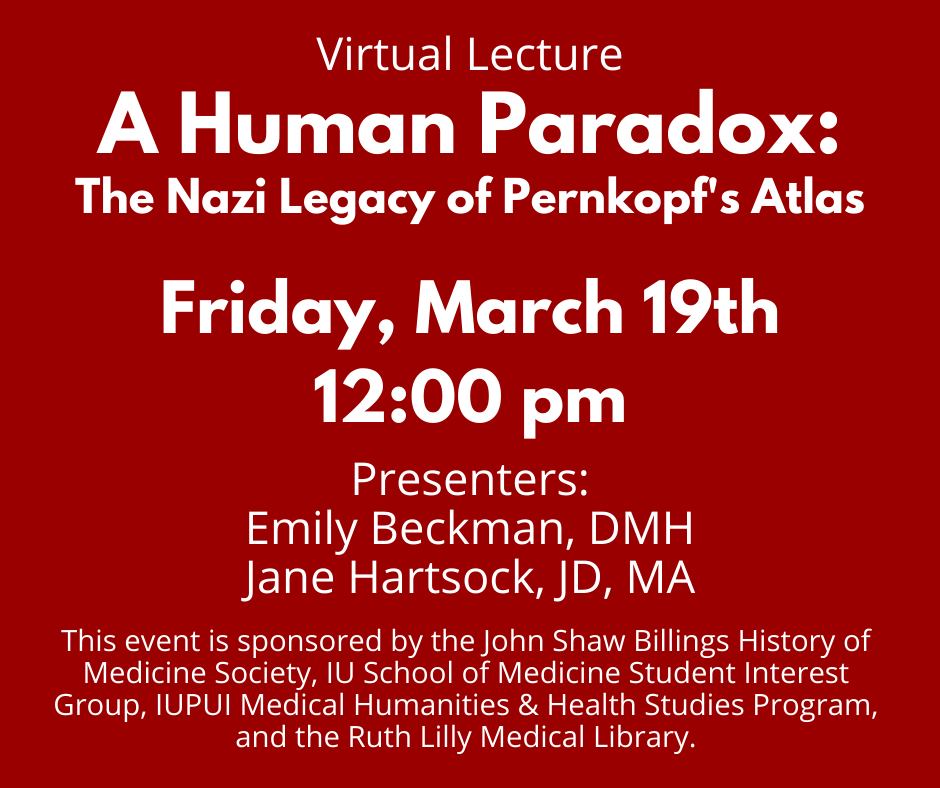 Eduard Pernkopf’s Atlas of Topographical and Applied Human Anatomy is a four-volume anatomical atlas published between 1937 and 1963, and it is generally believed to be the most comprehensive, detailed, and accurate anatomy textbook ever created.
However, a 1997 investigation into “Pernkopf’s Atlas,” raised troubling questions regarding the author’s connection to the Nazi regime and the still unresolved issue of whether its illustrations relied on Jewish or other political prisoners, including those executed in Nazi concentration camps. Following this investigation, the book was removed from both anatomy classrooms and library bookshelves. Having encountered a first edition copy at the IU School of Medicine Ruth Lilly Medical Library, these authors were given a unique opportunity to engage with the text through the respective humanities lenses of history, ethics, and narrative.
In this talk, we recount the difficult and somewhat opaque provenance of this book, engage the ethical questions surrounding both its creation and its use, and ultimately propose a pedagogical methodology for its continued use in medical education.
Presented by:
Emily Beckman, DMH
Director and Assistant Professor, Medical Humanities and Health Studies
Jane Hartsock, JD, MA
Director of Clinical Ethics, IU Health
Register here: https://iu.zoom.us/…/tZcsdu-hqzksGt20wCeRrKVOnnwCUkkM3rdv
This event is sponsored by the John Shaw Billings History of Medicine Society, IU School of Medicine Student Interest Group, IUPUI Medical Humanities & Health Studies Program, and the Ruth Lilly Medical Library.

Welcome to the RLML News Blog

Find out what is happening at the Ruth Lilly Medical Library. This is your resource for library announcements including updates on library hours, new resources, events, and all things RLML.